Trying a new recipe today. Actually breaking in my new brewing equipment. It’s long overdue. Got this one from Brooklyn Homebrew, because I forgot to get a recipe before I went.

Continuing our brewing tradition on the Right Coast, I finally went and got me some carboys and whatnot. This is our 2nd batch on the East Coast. Brewed in my apartment in the Bronx.

Heated about 2 gallons of water in my 20qt stockpot to 154ºF. Turned the heat off and added my grains in a nylon bag to steep for an hour. Rinsed them with about 2 quarts of 170º water.

Heated wort to a boil and added the 6.6lbs of malt extract. When it returned to a boil, I added the 2oz of hops. After 60 minutes at full boil, I removed the wort from the stove.

I added a bunch of ice to my primary bucket and then poured my wort into the bucket. Stirred it to melt the ice and had to add more ice. It still only dropped to about 85˙F, Measured the specific gravity at this point. Ran the wort through a cold water bath to bring it down into the high 70s. Pitched the yeast. Left it in 6.5 gal carboy as primary fermenter.

Racked from primary into secondary carboy. After this no new activity was observed. No foam, nothing.

Bottling day! Racked the beer from the carboy to a bucket. Mixed 5oz of dextrose with water, heated it and mixed it into the beer. Also took FG measurement and temperature. Bottled into 50 12oz bottles of various types. Had a little less than 5gal to bottle. 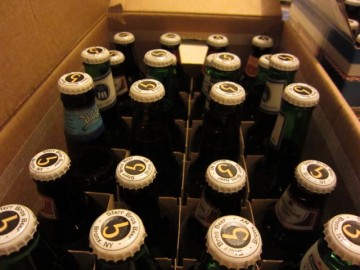 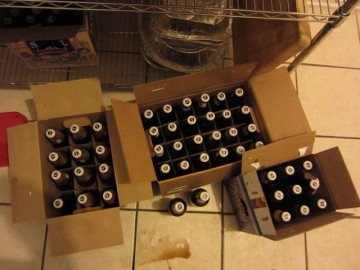 50 bottles of beer on the wall…

First taste. Delicious! A nice solid stout. Quite a foamy head at first and it lasted for a while. Also, pretty sure the estimates on SRM were way off, because this beer is black. A keeper for sure.