I decided it was time to make this beer again. I really liked how it turned out last year when I made it, and I have been wanting to make another pale ale for some time. I’m using the same recipe as the original Sierra Nevada Pale Ale clone I created, the Sierra Cascade Ale. The hops I used this time had a little more alpha acids, so the beer will have more IBUs than last year but I don’t mind this at all.

When the boil began I added my Perle hops for bittering. At 15 minutes left I added 1 ounce of Cascade for flavor, and at 5 minutes I added another ounce of Cascade hops for aroma. After the hour long boil I turned off the heat and put the pot in a quick cold water back to take some of the initial heat away. I then strained the wort into my primary bucket and added ice and cold water to cool it and bring the volume to 5.5 gallons. When the wort reached about 70 degrees I pitched the yeast, attached a blow off tube, and set the primary in my brew room to start fermentation.

8-12-11: Added one ounce of Cascade hops for dry hopping to secondary carboy and racked the beer onto it. OG measured at 1.010, giving a strength of 5 %ABV. Will let it sit in primary for two weeks before bottling.

8-27-11: Racked to a bottling bucket. FG measured at 1.008 giving it a strength of 5.2 %ABV. Dissolved the 3.8 ounces of priming sugar into boiling water and added this to the bottling bucket. Bottled into 12-ounce bottles. 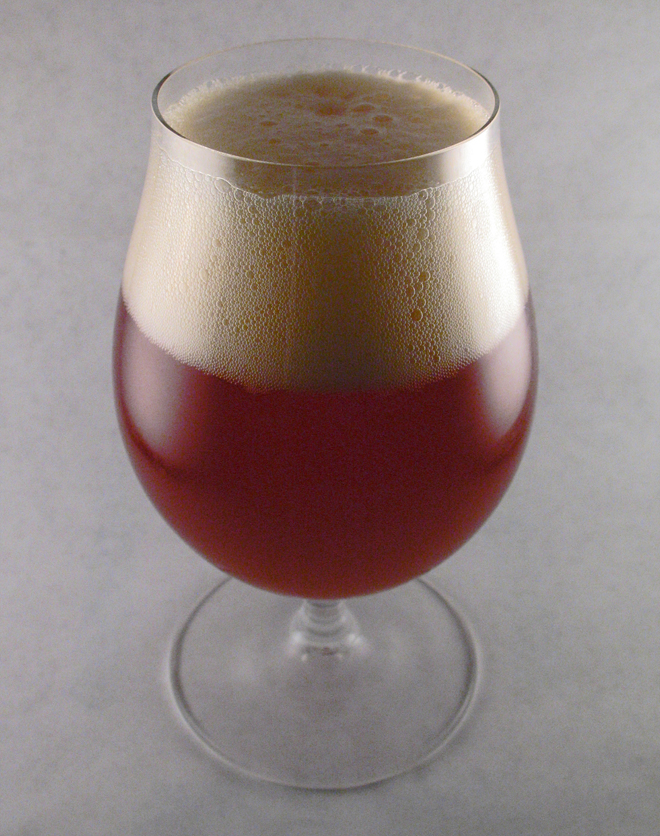 Pours with a strong aroma of Cascade hops and a dark gold color. The initial head is impressive, a few inches at least. Within a few minutes it settles down to a fine layer of bubbles on the surface of the beer. The smell is wonderfully hoppy and floral. The taste is of strong Cascade hops, a very nice bitterness with just a hint of malt. Mouthfeel is bubbly yet buttery. Finishes with the pleasant hop aftertaste for which I love this style of beer.

This turned out as well as the previous Sierra Cascade Ale I had brewed, and this is definitely a keeper. I will make this again as it is a solid IPA with great flavors and a beautiful look.