My first beer in over seven months, wow. My carboys have been in use making wine and I haven’t had much time to make beer. Now that I have finished Spring quarter and have the summer free, I plan on  doing some more beer brewing. I saw a recipe for a nice Cream Ale with vanilla on HomeBrewTalk and it had some very nice reviews, so this recipe is largely based off of that. It is a new style for me to try and I get to mess around with lactose for the first time, so it should be a fun beer to make.

First of all, I activated my pack of yeast so that it would be ready to pitch by the time the wort was prepared. I heated one gallon of water to about 170 F, then added my pound of crystal malt grains in a steeping bag. This brought the temperature down to about 160 F, and I let it steep for 45 minutes. After steeping, I used two gallons of water to rinse the grains, bringing the boil volume up to three gallons. The liquid malts were then added and dissolved as the wort was heated to a boil.

The boil was a standard 60 minutes. When the boil started I added the ounce of Cascade hops for bittering. At 20 minutes I added half an ounce of Saaz for flavor. At 15 minutes I added 4 ounces of lactose to give some body to the beer (lactose being a sugar derived from milk which is not consumed by the yeast). At 10 minutes I added 1 teaspoon of Irish Moss to help clear the beer. I placed the ounce of Tettnang hops for aroma into my primary 5-gallon bucket, and then when the boil was completed, I strained the beer into my primary 5-gallon bucket. This removed the bittering and flavoring hops from the beer, but left the aroma hops in the primary.

I then cooled the wort down to about 80 F using some ice I had made and some cold water, enough to make 5.5 gallons. When this temperature was reached I added 2 ounces of pure vanilla extract. I also pitched the yeast and then sealed the bucket with a blow-off tube. I am expecting some heavy fermentation and don’t think an airlock will cut it.

6-30-11: FG measured at 1.012, giving a strength of 6.2 %ABV. I racked the beer into a bottling bucket. I then heated 1 pint of water to a boil and dissolved my priming sugar and lactose in it. I added this to the bottling bucket along with 3 more ounces of vanilla flavoring, and then bottled the beer. 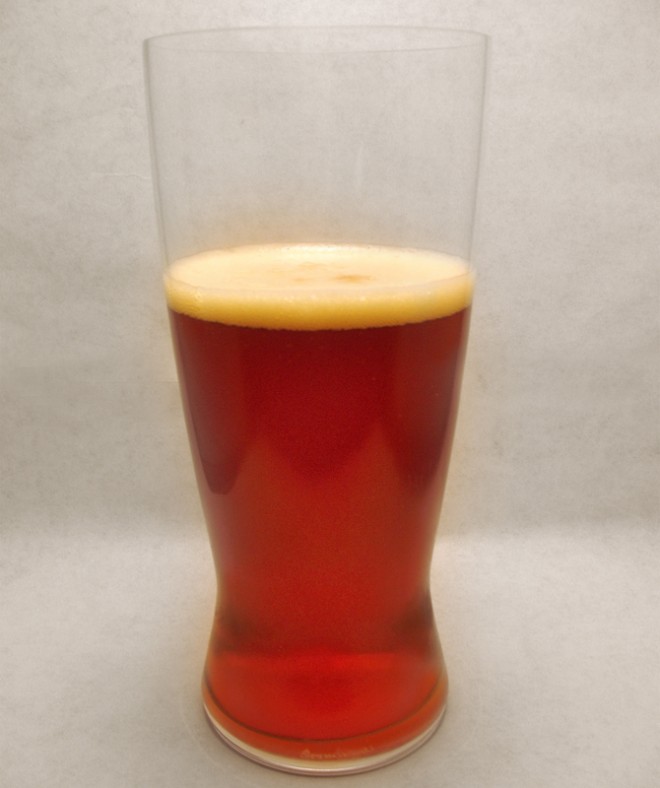 The beer pours a deep amber color with a half inch of golden head. The head retention is decent; it stays at around a quarter inch while drinking and leaves small amounts of delicate lacing on the glass. The aroma is of malt and faint vanilla. The vanilla comes through more in the taste, where it is readily apparent and leaves a sweet aftertaste. This is something I might call a dessert beer, it would go well with a piece of pie or even some ice cream.

This turned out as a pretty sweet beer, something I think would be pretty palatable for non-beer drinkers. It is something that I like to have one or two of, but drinking much more of it gets a bit too sweet for me. The sweetness isn’t overpowering, it is nice for the first beer or so. I just prefer a bit more hop character or malt complexity in my beers.