After liking the Blackberry Wheat Ale I made last year around this time, I decided to try a different style of blackberry beer. I found this recipe sometime last year and made some modifications based on the advice of one of the employees at Larry’s Brewing Supply. I think it is going to turn out well, and I’m excited to try a porter with fruit.

Activated the yeast pack. Put 1 gallon of water into my cooking pot and heated it to 155 F, at which point I added my grains in a grain bag to steep for 30 minutes. After steeping I rinsed the grains with another gallon and a half of warm water, and then I heated the wort to a boil. As it was heating I added my liquid malt extract to dissolve.

When the boil began I added my ounce of Northern Brewer and half an ounce of Fuggles hops for bittering. At 15 minutes I added the other half ounce of Fuggles for flavor, and also added the malto-dextrine for some added body and the Whirlfloc tablet to help clarify the beer. After 60 minutes of boiling I removed the pot from the heat and poured it into my primary bucket with some ice to cool it to around 80 F, reaching a volume of 5.5 gallons. I then pitched the yeast and sealed with a blow-off tube.

10-1-11: Added blackberries to secondary and then racked beer onto them. SG measured at 1.026 giving a strength of 5.3 %ABV before the blackberries were added.

10-18-11: Racked off the blackberries and yeast into a bottling bucket, and I ended up with just 5 gallons of beer. I dissolved the priming sugar in a pint of water and added it to the bucket and then bottled. FG measured at 1.020 giving a strength of 6.0 %ABV, though this figure is based only off the OG before the blackberries were added so it is a  bit stronger than this. 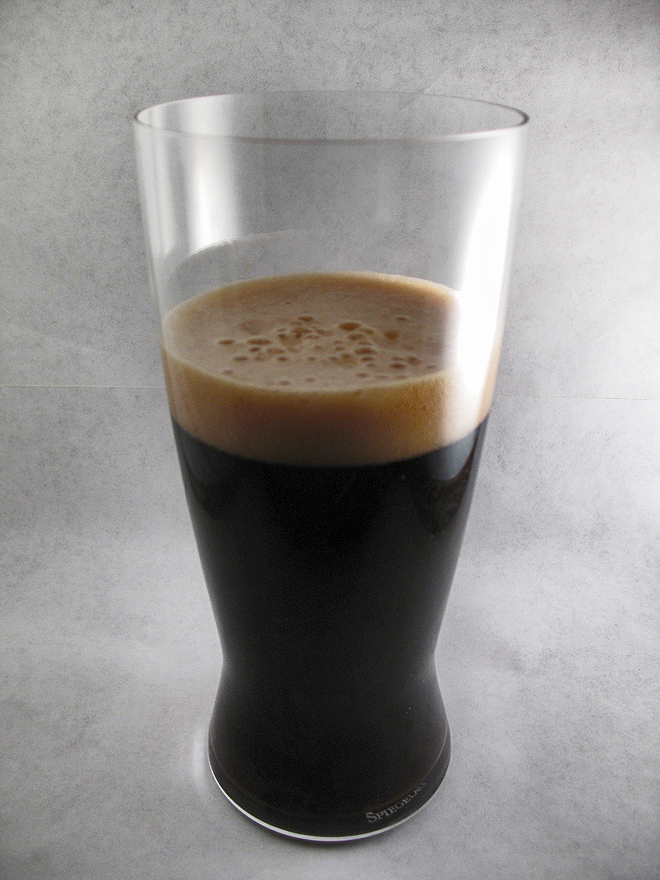 The beer pours an almost black color, with a slightly reddish tint visible through the stream while pouring. It is a dark, opaque beer in the glass. The tan head is initially a good inch or so, and it dissipates  to a small ring around the outside of the glass after several minutes. Quite a bit of lacing appears as you drink. The flavor is upfront fruity and malty sweetness balanced by roasted malt and hops, a flavor similar to oak is present, and the fruit flavor lingers a bit in the aftertaste. The smell is of oak, chocolate, and faint blackberry.

The Blackberry Porter is the best fruit beer I have made so far. It has nice roasted malt characteristics and a subtle blackberry flavor which balance well together. If anything, it could maybe use a bit more blackberry to make that flavor more pronounced.