Last year for Christmas, I gave my sister-in-law a starter kit to learn how to home-brew along with a promise that I would come by and walk her through it. Well, I guess it was a busy year, because 2011 went by and I never got around to it. So I headed up to Westchester County for the day to deliver some late Christmas-gifts to my niece and nephew and finally brew a batch of beer. This would be the Sterr Bros first brew on the East Coast.

Activated the yeast pack. Put about 1.5 gallons of water into 20qt stockpot and heated it to 155˙F. Added grains in a nylon grain bag to steep for an hour. Then rinsed the grains with a half gallon or so of hot water and heated the wort to a boil. Once boiling, added the liquid malt and the sugar and stirred it in until it dissolved.

I added 7lbs of ice to my primary bucket and then poured my wort into the bucket. Stirred it to melt the ice and had to add more ice. It still only dropped to about 90˙F, so we placed it outside in the 20˙ weather to cool to 70˙F. Measured the OG and pitched the yeast.

Left the beer in primary (brew bucket) for one week. Then it was racked to a 5 gal carboy, where it stayed for two weeks. Transferred it back to the bucket and bottled it on February 4th with a yield of 50 bottles. 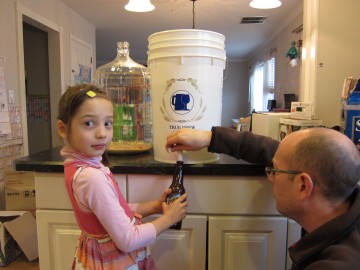 Bottling with my brother 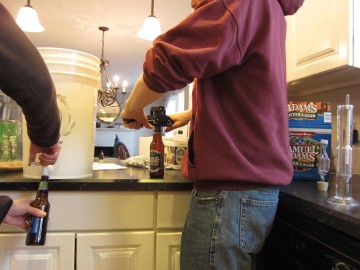 So I just tried this after 9 days in the bottle. Carbonation was there. Not much head at all, a little bit of lacing on the glass. Overall, not very impressed with the taste. I think maybe it is the adjuncts used. That’s where I put the blame anyway. One of my least favourite beers I have made, but maybe 15 beers later and a couple more weeks will change my mind.

Okay, I changed my mind. Maybe it wasn’t done fermenting. A few days in the fridge may have helped cold crash the yeast and settle it out. The flavor has changed considerably. What is also interesting is that the beer was clear in the bottle, but after being in the fridge for a few days it clouded slightly. In any case, it is much improved since my first opinion