The Sierra Cascade Ale only took three weeks to brew, and after a few weeks in the bottle they are tasting very good. This bottle was a 16 oz and had a little less carbonation than some of the others during the pour, but was nicely carbonated while drinking. 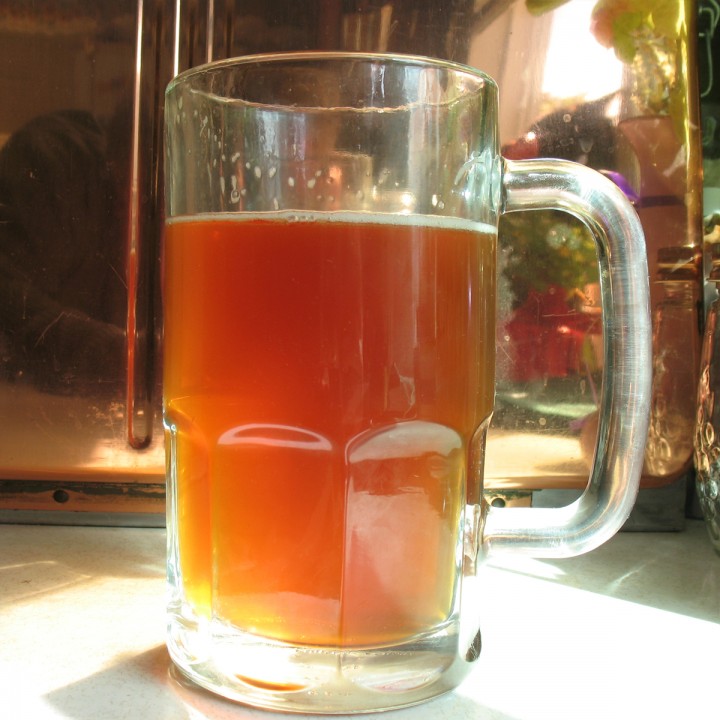 The beer pours out with a nice head. The smell you first encounter is a nice hop aroma created by the Cascade hops that were used to dry hop the beer. There are some notable grains in the smell as well.

The Sierra Cascade Ale starts off with a malty flavor on the tongue, and this smoothly progresses into fruitiness and bitters from the hops. The beer is very well married, the flavors blending into a nice hoppiness which resides after taking a drink. The hops are not overpowering, and the malts have a good presence. The mouthfeel is pleasantly light and the beer is definitely drinkable.

Jeff and I tried some of these side-by-side with some Sierra Nevada Pale Ales. The Sierra Nevada has more malt character in their beer, partly due to the fact that the are making all-grain batches compared to our part-extract recipes. The hops in both are the same Cascade hops which have such a nice aroma. Our Sierra Cascade has a subtler flavor but a nicer hop finish than the Sierra Nevada, and both are very tasty and enjoyable beers.

We will probably make another recipe like this very soon. It was a quick brew, it turned out very well, and there is lots of room for experimentation.